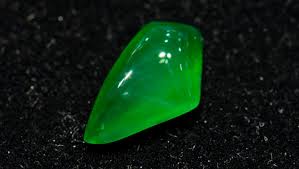 Burmese jade is a kind of jade

Burmese Jade is a type of jade that can be either emerald green (also called emerald) or red. Other names for jade are emerald jade, emerald jade, jadeite, and Burmese jade (can be called jade). It is a polycrystalline aggregate that looks like jade and is mostly made up of jadeite, omphacite, and nichrome pyroxene. It was formed by geological processes.

The ancients believed that Burma jade was originally a stone in the sky, which could bring good luck.

Burma jade represents purity, the sun, justice, courage, harmony, and a pure soul, as well as male-female love. The meaning of Jade’s name is unknown.
Jade is a bird that lives in the south, Some believe that is the bird’s name. This bird has bright feathers. The male bird has crimson feathers. The female bird has green feathers. They matched both of them have vibrant color feathers, and people named the gemstone using their feather color attribute. because the colors are quite similar to the hue of the bird’s feathers

Jadeite is produced in Japan, Russia, Mexico, California, and other places in the United States, but its quality and output are far inferior to Myanmar.

Early jadeite mines in Myanmar produced gem-quality material. Jadeite and Burmese jade were once interchangeable because, for a very long time, people only knew that Myanmar manufactured it. There aren’t many jadeite sources on the globe. Only the US, Japan, Russia, and Myanmar produce anything. The jadeite from Myanmar is the best quality of all of them; the quality of the jadeite from other nations is inferior to that of gemstones. Jadeite is sometimes known as Burmese jade because of its low degree of value.

It also has a strong relationship to Chinese culture because it started to flow into that country in the late Ming and early Qing Dynasties. The delicate and elegant texture of jadeite also coincides with the gentle and elegant demeanor that the gentlemanly demeanor of gentleness, grace, and civility has long been valued in Chinese culture since ancient times. The princes and nobles adore and revere him because his style fits them so perfectly. Men will wear a jade pendant around their waists, and women will also wear jade hairpins, which are very popular.

After more than 400 years of development, jade has now formed a splendid and unique jade culture or jade art.

Burmese Jade has long indicated a kind of aura in our ancient East, as though it has a mystery and mystical power aura, therefore wearing it is particularly remarkable. Empress Dowager Cixi is a representative of celebrities that adore jade. She specifically mentioned royal jade. The third stage follows the reform and opening up of the previous century. The jadeite trading marketplaces dominated by Ruili, Yingjiang, and Tengchong in Yunnan Province, as well as Mandalay in Myanmar, resulting in an influx of raw jadeite rough into Yunnan’s border, attracting many customers. People travel to the Yunnan border to purchase jadeite. During this time, the main trading platforms were Guangdong’s jade carving factory, Kunming’s handicraft import, and export company, and Beijing’s jade purchase factory, resulting in a group of old-timers in the jade sector in Guangzhou, Kunming, and Beijing today.